If you have booked Pete for your Guest Speaker for your event and require more details about him, here is a brief autobiography how he became a Guest Speaker. 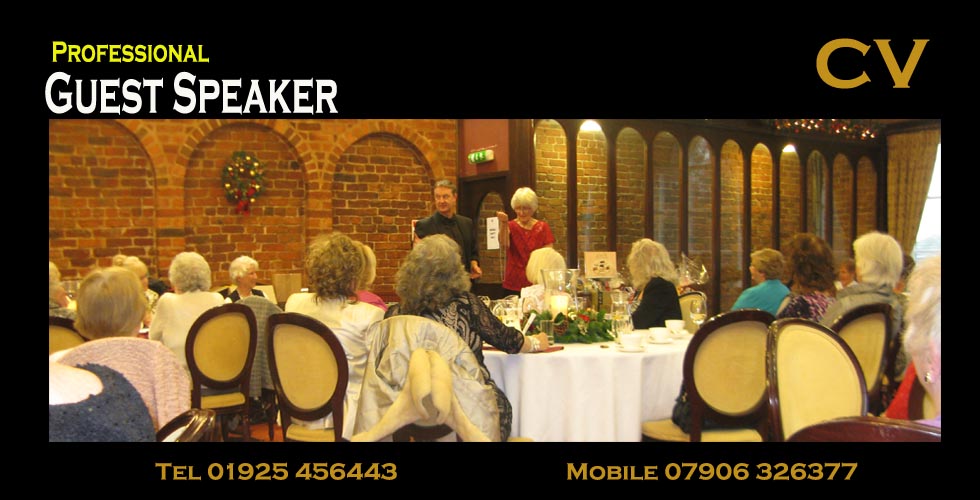 In my younger days, I never thought in a million years I would be a Guest Speaker standing up in front of all kinds of groups, clubs and societies. The thought of such endurance frightened me. I couldn’t even give a simple team talk to my local 5 – a – side football team as a captain, never mind talking to over two hundred people on a cruise ship. I even remember when I was a best man for a friend’s wedding and I had to do a speech. I literally went to pieces and delivered a useless and disappointing speech. It ruined the rest of my day and I vowed that I would never speak in front of people again. I even turned down other duties as a best man, all because of the dreaded speeches.

During my career as a machine printer and running my own business in the food industry, I had a fascinating hobby, which is the beautiful art of magic. I performed magic tricks to many friends and family, and of course on every holiday (when I got a few free drinks and made new friends) This gave me the precious gift of “CONFIDENCE”.

My keen interest and love of the art of magic went to another level and I got hired out for all kinds of events such as weddings, corporate, birthdays and other special occasions. I sold my food business and decided to do magic full time and become a professional magician.

My Guest Speaker career started as I was on my daily runs at the tail end of my food business. One of my customers was a Speaker Secretary for Runcorn Probus. He explained to me that his speaker had let him down three days before the meeting. In a panic and a last minute gasp, he approached me to see if I could do a talk on magic, knowing I was into my hobby in a big way. I replied to him saying, “I’m an entertainer, not a guest speaker”, therefore I rejected his kind proposition. That night, this Speaker Secretary called me to say he was really desperate and tried to persuade me to come along and talk to his group. I really liked this gentleman and he was a good customer of mine. Even though I didn’t really want to do the talk, I felt that for PR reasons within my business, I had to help him out.
After the call, I spent over three hours trying to put together some kind of talk. I couldn’t even sleep that night. I kept tossing and turning and thinking about what I was going to say. Next morning, the day of my talk, I was a nervous wreck. My mind was so focused on the talk, I nearly had an accident in my car on the way to the meeting. When I arrived at the Probus venue, the committee made me feel very welcome and relaxed which helped me enormously.
The most daunting moment of my talk was the introduction for me to start, but amazingly, when I actually got started, I was OK. My knowledge of my hobby carried me through the nerves and surprisingly I felt I had delivered a successful talk. The applause and the Probus members’ reactions gave me the impression that they enjoyed it. After my lecture, I was absolutely mentally, physically and emotionally shattered when I got home. The adrenaline was that high, that I couldn’t even sleep the next night. It took me up to three days to get over it and I swore I would never do it again.

One week, I got a call from another Speaker Secretary in Frodsham in Cheshire saying he had heard I had done an interesting talk on magic and would be interested in booking me for his Probus meeting. I must admit, it was easy to say yes after knowing how well my talk was delivered at the Runcorn Probus. From then on, my talks about magic snow balled to other Probus’s, then Women’s Institutes, then other groups, clubs and societies all over the North West.
Although I was happy with my topic, I felt I had to learn new techniques as a Guest Speaker, so I joined the Warrington Speakers Club. The club was a godsend; they taught me valuable tips regarding breathing techniques, hand gestures and posture.
Over the years, my talks have matured and been well tweaked to suit a wider market. From just talking about the basic subject of magic, my lectures have experienced an amazing transition and have become educational with amazing experiments and demonstrations regarding the science of perception, deception, misdirection and the power of reverse psychology.

The one that stood in my mind was when I presented my lecture in front of three people. I was heading into the hills of mid Yorkshire in the middle of winter where the snow was very heavy.  After a horrendous journey, I turned up to the venue, only to find out that only 3 committee members turn up. The other members didn’t want to risk going out in the snow.

There is a saying in the entertainment business “The show must go on”…and it did. It was a good fun and the memory stood firm in my mind. After my presentation, the snow became heavier. The Speaker secretary then offered me to stay overnight at their home as conditions was really bad. I took her them with their proposition and had a few glasses of sherry and a few snacks.  The next morning I had a lovely breakfast and the snow did subside for me to get home. The funny thing is, when I got home in Warrington, there wasn’t a flake of snow to be seen.

NEVER SAY NEVER
Considering I vowed that I would never talk in front of any kind of public audience or group in my younger days, it is amazing that I have done over 900 lectures and been the best man on three other occasions. I have also given over 100 lectures on cruise liners and have even got up at a church pulpit and talked for ten minutes in front of a packed congregation at a funeral. I must admit, that was the most difficult speech I have done and ever will do.

It doesn’t matter how small or large the groups are, I fully enjoy presenting my lectures. To see the joy and smiles on the faces of my audience makes me feel human.